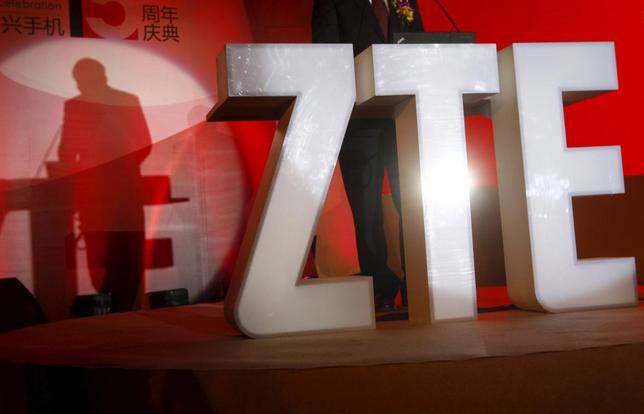 The ZTE company logo is seen as a guest delivers a speech during the company’s 15th anniversary celebration in Beijing in this April 18, 2013 file photo.

China’s ZTE Corp, in a routine management reshuffle, has replaced three senior executives alleged to be the main signatories to documents purportedly showing the company made efforts to dodge sanctions against Iran.

The change in personnel was made just weeks after the U.S. government released the documents and imposed tough export restrictions on the telecom equipment maker.

The U.S. government has since said it would ease the restrictions until the end of June and could further ease them if ZTE cooperated in “resolving the matter”.

On Tuesday, ZTE said it had named current Chief Technology Officer Zhao Xianming as its new president, effective immediately, replacing Shi Lirong, who had been in the role since 2010.

The company also appointed seven executive vice presidents, but this list did not include Tian Wenguo or Qiu Weizhao, both of whom served in that position until Tuesday’s shake up.

Shi, Tian and Qiu, the only people dropped from ZTE’s top management, were also the only member’s of the firm’s senior executive bench named in the documents released by the U.S.

The company reshuffles management every three years, and the changes are in line with the company’s regular schedule, a ZTE spokesman told Reuters on Monday.

While reshuffles at ZTE happen frequently, a high-level change is almost certainly related to the U.S. export restrictions, said Kang Rongping, a director at the Institute for World Chinese Business at the think tank Center for China & Globalization.

“In recent years, ZTE hasn’t been doing too well, so adding these export restrictions is making a bad situation worse,” said Kang, referring to the company’s business growth.

Outgoing president Shi had been in the position for six years. Tian had been an executive vice president since 2005 and Qiu since 2007, according to ZTE annual reports.

Their terms, which are for three-year periods and can be renewed, were due to end March, 2016, according to a ZTE stock exchange filing in 2015.

Shi, Tian and Qiu were three of the main signatories on alleged internal documents released by the U.S. Department of Commerce detailing efforts to circumvent Washington’s export controls on Iran and other countries.

The documents, marked “Highly Confidential”, name Tian and Qiu as the people who had allegedly instructed ZTE to carry out a project for dodging export controls in Iran, North Korea, Syria, Sudan and Cuba, and made up the two-person “Project Executive Committee.”

ZTE declined to comment on the documents when contacted by Reuters on Tuesday.