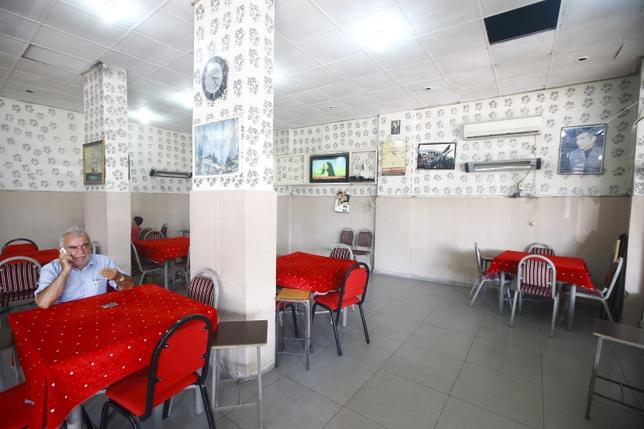 A man talks on his mobile phone at an empty tea shop in the southeastern city of Diyarbakir, Turkey, August 31, 2015.

As Turkey prepares for the launch of high-speed 4G cellphone services next month a row is brewing over rivals wanting cheaper access to partly state-owned Turk Telekom’s fiber optic network, saying that otherwise they cannot compete in a market where fixed-line and mobile services are set to converge.

At stake is a fast-growing market of 78 million people where the median age is around 30, younger than anywhere else in Europe, and an attractive proposition for telecoms companies, as younger people demand more bandwidth to stream movies, play online games and communicate both at home and on the move.

Turk Telekom has spent 20 billion lira ($7 billion) over the last decade on building the country’s most extensive fiber-optic network and is now looking to bundle high-speed fixed line and mobile services into a single contract to attract more mobile customers after the April 1 launch of 4G services.

While Turk Telekom has just 23.4 percent of the mobile market, compared with 46.2 percent for Turkcell and 30.4 percent for Vodafone Turkey, analysts say its fiber network is the big attraction.

It has laid 213,000 km of fiber, six times more than Turkcell, while Vodafone is further behind still. It charges its rivals to use the network, setting the price itself. Turkcell and Vodafone want prices regulated and are pushing for the creation of a joint company to manage the network.

“We have to bring fiber to every household and that requires a mobilization for digital transformation,” Turkcell Chief Executive Kaan Terzioglu told Reuters. He estimated that by working together on building fiber networks, rather than investing separately, operators could save $12.5 billion.

‘NOT FAIR, OR POSSIBLE’

“That’s been the global trend of ‘convergence’, where customers move to a single provider for mobile, fixed voice, broadband, and TV,” said Cenk Sezginsoy, a partner and managing director at Boston Consulting Group.

Turkcell has a fiber network of around 35,000 km, mostly in big cities. Its fiber network serves 900,000 subscribers, compared with 1.5 million for Turk Telekom.

But wiring up the rest of Turkey will require a joint effort, said Vodafone Turkey’s chief executive, Gokhan Ogut.

“Turkey needs 250,000 km more fiber-optic lines in the next five years. To expect that from just one operator is not fair or possible,” he told Reuters.

Yet Turk Telekom CEO Rami Aslan bristles at the idea of having to share his network and says he plans to invest another 10 billion lira in the next three years.

“Another operator’s fiber network is around 35,000 km over the course of their eight-year journey in the business, another claims there is not enough fiber and I believe they haven’t invested at all.”

However, Aslan said he would not rule out joint investments with the other two operators in rural areas.

It remains unclear what, if anything, the government will do. Transportation Minister Binali Yildirim told telecom operators in February to stop “showing off” with boasts about their speed and network size and start working together.

“We have to start fiber mobilization,” he said.

While 4G has been available in some markets for years. Turkey’s plan to roll out the service was complicated last year when President Tayyip Erdogan suggested the country should “skip” 4G and wait instead until fifth-generation technology becomes available.

The government then rebranded its tender for 4G mobile spectrum as “4.5G” although that is not a globally recognized standard and the term has already fallen into disuse.

One official suggested the government has little appetite for a sweeping move to force rivals to share their fiber networks.

“It is not fair to force Turk Telekom to transfer its fiber network,” the official said. “It is like you have built a house and others are trying to live there without paying a rent.”