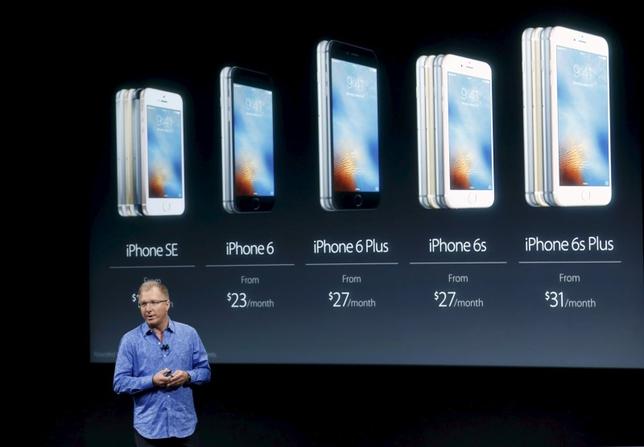 Apple Vice President Greg Joswiak introduces the iPhone SE during an event at the Apple headquarters in Cupertino, California March 21, 2016.

Apple Inc’s (AAPL.O) new iPhone SE has first-rate features and a relatively low price tag, but its prospects in key markets like China and India may be limited by its diminutive size.

At the product launch in Cupertino, California on Monday, Apple vice president of iPhone Product Marketing Greg Joswiak singled out China as a target market, saying four-inch displays like that on the iPhone SE were still popular with first-time smartphone buyers.

Chinese buyers tend to start off with a phone with a 4-inch screen, just like the iPhone SE, he argued.

China, Apple’s second-biggest market, and India, one of the fastest-growing major markets in the world, are both seen as key for Apple, which expects overall iPhone sales to contract.

The iPhone SE is seen as particularly important for India, where Anshul Gupta, research director at Gartner, expects the smartphones market to double to 200 million units in the next two years.

But in India and China, smartphones are often the main connection to the digital world, and a big screen is highly valued, analysts said.

“(In India) the majority of the low-end, $100 phones have a five-inch display. The key reason being smartphone users are becoming more mature are preferring bigger screen size as many of them don’t own a tablet or laptop,” said Neil Shah, research director at Counterpoint Technology Market Research based in Mumbai.

Only 10 percent of smartphones sold in India at the end of December had a four-inch screen, according to Counterpoint, and Apple accounted for only two percent of overall smartphone shipments in India last year.

And with nearly 70 percent of smartphones selling for less than $150 in India, the iPhone SE’s roughly $400 price tag may still be out of reach for most buyers there.

In China, analysts warned the iPhone SE could mirror the disappointing outcome of Apple’s iPhone 5C, which was launched as an affordable gadget three years ago. It was also less technologically advanced than the top phone at the time.

“The 5C was awful, no one wanted it. Everyone knew that if you bought it you had no money,” said Shanghai-based Shaun Rein, founder of China Market Research Group.

Apple’s second attempt to enter the mid-tier smartphone market, crowded with Android devices by rivals like Samsung Electronics (005930.KS) and Huawei, is seen as an improvement on the 5C strategy.

The iPhone SE is up to date with the latest processor, fingerprint scanner and Apple Pay, and at $399 it costs nearly 40 percent less than the iPhone 6S’s $649 opening price.

(Additional reporting by Himank Sharma in Mumbai and Stella Tsang in Hong Kong; Editing by Peter Henderson and Cynthia Osterman)