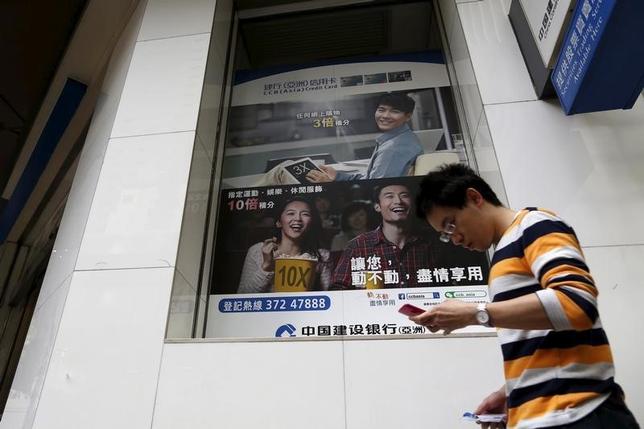 A man walks past an advertisement for young customers of China Construction Bank, in Hong Kong, China November 30, 2015.

Investors poured a record $4.5 billion into financial start-ups in Asia last year, four times as much as the previous year, data shows, putting the region at the center of the global tech revolution poised to shake up the financial services industry.

In Asia, investments rose at a much faster pace, led by mammoth funding rounds for fintech companies in China and India, and with billions of consumers in the region using their mobile phones for everything from buying insurance to paying for goods, the trend is expected to continue.

China, where investments surged to $2.7 billion, attracted nearly three times the investments seen in Britain over the 2014-2015 period, the data showed.

“Naturally, because growth in the region is quite high, you should expect to see continued investment,” said Zennon Kapron, founder of Shanghai-based financial industry research firm Kapronasia.

India and China have large populations and a high adoption rate of new technologies, making them fertile ground for fintech companies looking to disrupt traditional players such as banks, insurance companies and credit card operators.

India, where nearly two-fifths of its 1.27 billion people have no bank accounts and only 252 million have Internet access, is seen as a promising growth market for firms looking to leverage technology to connect financial services and products, particularly through mobile phones.

“The rising number of people getting used to smartphones and new technologies in India will result in more funds flowing into the fintech solutions providers in the near-term at least,” said Harish HV, an India-based partner at advisory firm Grant Thornton.

Lufax closed a $1.2 billion funding round in January, while Alibaba Group Holding Ltd’s finance arm, Ant Financial Services Group, is looking to raise up to $3 billion, setting the stage for another blockbuster year in 2016 in the region.

India’s mobile payments services firm One97 Communications came in sixth among global fintech giants, underscoring the potential value investors place on such firms in the region.

“There’s a lot of interest in this segment,” Harish said.