Bosch looking to smart devices to get ahead in the cloud

March 9, 2016
0
This post was originally published on this site

User-friendly and secure. Hardly anyone would pick either word to describe the vast majority of wireless routers in use today. So naturally I was intrigued a year ago when I had the chance to pre-order a eero, a new WiFi system billed as easy-to-use, designed with security in mind, and able to dramatically extend the range of a wireless network without compromising speed. Here’s a brief review of the eero system I received and installed a week ago. 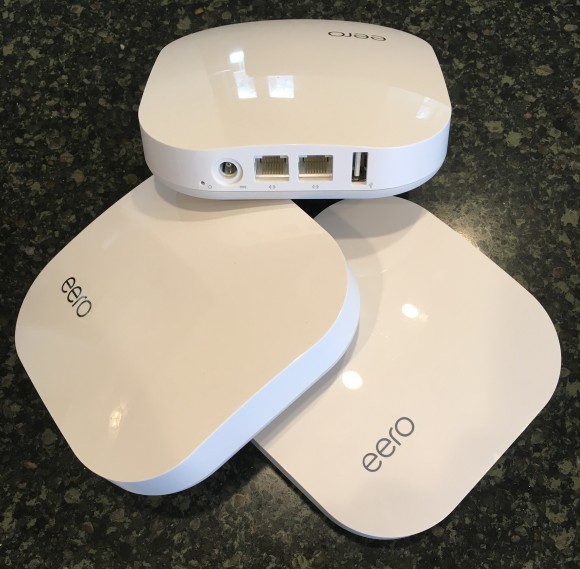 The standard eero WiFi system comes with three eero devices, each about the width of a square coaster and roughly an inch thick. Every individual eero unit has two built-in WiFi radios that are designed to hand off traffic with the other two units.

This two-radio aspect is important, as most consumer devices that are made and marketed as WiFi range extenders or “repeaters” contain only one radio, and thus end up halving the speed of the repeated WiFi signal.

The makers of eero recommend one device for every 1,000 square feet, and advise placing one device no further than 40 feet from another. Each eero has two ethernet ports in the back, but only one of the eeros needs to be connected directly into your modem with an ethernet cable. That means that a 3-piece eero set has a total of five available ethernet ports, or at least one open ethernet port at each eero location.

Most wireless routers require owners to configure the device by using a hard-wired computer or laptop, opening a browser and navigating to a numeric Internet address to enter some default credentials. From there, you’re on your own. In contrast, the eero system relies on a simple mobile app for setup. The app asks for your name, email address and mobile number, and then sends a text with a one-time passcode.

After you verify the code on your mobile device, the app prompts you to pick a network name (SSID) and password. The device defaults to WPA-2 PSK (AES) for encryption — the strongest security currently available.

Once you’ve assigned each eero a unique location — and as long as the three devices can talk to each other — the network should be set up. The entire process — from placing and plugging in the eeros to setting up the network —  took me about five minutes, but most of that was just me walking from one room or floor to the next to adjust the location of the devices.

The eero system did indeed noticeably extend the range of my home WiFi network. My most recent router — an ASUS RT-N66U, a.k.a the “Dark Knight” — cost about $150 when I bought it, but it never gave me coverage throughout our three-level home despite multiple experiments with physical placement of the device. In contrast, the eero system extended the range of my network throughout our home and to about a dozen meters outside the house in every direction.

In fact, I’m now writing this column from a folding chair in the front lawn, something I couldn’t do with any router I’ve previously owned. Then again, a wireless network that extends well beyond one’s home may actually be a security minus for those who’d rather not have their network broadcast beyond their front porch or apartment walls.

This is a good time to note one of eero’s best features: The ability to add guests to your wireless network quickly and easily. According to an interview with eero’s co-founder (more on that below), the firewall rules that govern any devices added to a eero guest network prevent individual hosts from directly communicating with any other on the local network. With a few taps on the app, guests are invited to join via a text or email message, and the invite contains the name (SSID) of the guest wireless network and a plaintext password.

There are a few aspects about the eero system that may give pause to some readers — particularly the tinfoil hat types and those who crave more granular control over their wireless router. Control freaks may have a hard time letting go with the eero — in part because it demands a great deal of trust — but also because frankly it’s a little too easy to set up.

There aren’t a lot of configuration options available in the app. eero says it is working on rolling out new features and options, and that it’s so far been focused on getting shipping all of the pre-ordered units so that they work as advertised. This is a WiFi system that I can see selling very nicely to relatively well-off consumers who don’t know or don’t want to know how to configure a wireless router.

To be clear, the eero is not a cheap WiFi system. I paid $299 for my three eeros, and that was at the pre-order rate. The same package now retails for $399. In contrast, your average, 4-port consumer WiFi router sells for about $45-$50 at the local electronics store and will do the job okay for most Internet users.

Another behavior central to the eero that is bound to be a sticking point with some is that it is is regularly checking for or downloading new security and bug updates from the cloud. This may be a huge change for consumers accustomed to configuring all of this themselves, but overall I think it’s a positive development if done right.

For starters, the vast majority of consumer grade routers ship with poorly written and insecure software, and often with unnecessary networking features turned on. It’s a fair bet that if you were to buy a regular WiFi router off the shelf at the local electronics store, that software or “firmware” that powers that device is going to be out-of-date and in need of updating straight out of the box.

Worse still, most of these device will remain in this default insecure state for the remainder of their Internet-connected lifespan (which is probably at least several years), because few consumer routers make it easy for consumers to update, or even alert them that the devices need updates. There are so many out-of-date and insecure routers exposed to the Internet now that it’s not uncommon to find criminal botnets made up entirely of hacked home routers.

True, geeks who feel at home tinkering with open-source router firmware can void their warranty by installing something like DD-WRT or Tomato on a normal wireless router, and I have recommended as much for those with the confidence to do so. But I also am careful to note that anyone who updates their router with third-party firmware but fumbles a crucial step can quickly be left with an oversized and otherwise useless paperweight.

I wanted to know more about the security design that went into the eero, and fortunately was in eero’s hometown of San Francisco last week for the RSA Security conference. So I dropped by the company’s headquarters and got to sit down briefly with the company’s CEO and co-founder, Nick Weaver.

BK: Where does that distributed cloud architecture live?

NW: Today it’s Amazon, and everything is hosted on AWS. There’s a high frequency [of check-ins] but not a lot of traffic.  There is very little information exchanged. Only diagnostic info that explains how the links between the eeros are doing. You can think of it as a network engineer in the sky who helps ensure that your network is configured properly.

BK: How does the eero know the updates being pushed to it are from eero and not from someone else?

NW: Every update is signed by a key, and that key is locked away at [the bank].

BK: Does eero collect any other information about its users?

NW: There is no information collected ever about where you go on the Internet or how your connection is being used. That is not information that’s interesting to us. The other co-founder studied networking and security and contributed quite a bit to the Tor Project. We’ve got all the right tensions in our founding team. Security is really important. And it’s been totally underestimated by all the existing players. As we’re discovering more and more security vulnerabilities, we have to be able to move quickly and deploy quickly. Because if you don’t, you’re doing a disservice to your customers.

Would you buy a eero system? Sound off in the comments below.

This entry was posted on Wednesday, March 9th, 2016 at 10:02 am and is filed under A Little Sunshine, Security Tools. You can follow any comments to this entry through the RSS 2.0 feed. You can skip to the end and leave a comment. Pinging is currently not allowed.