Twitter praised for cracking down on use by Islamic State 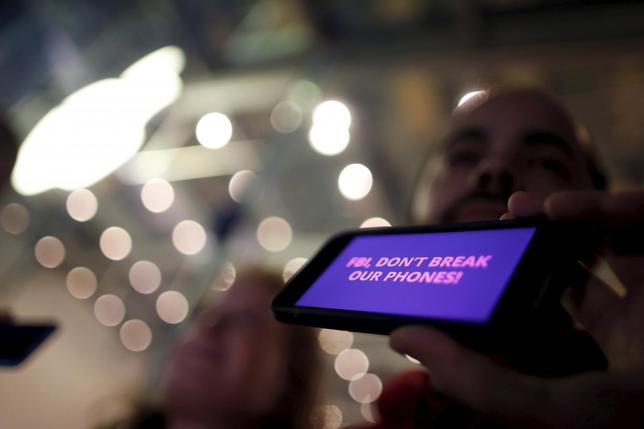 A man displays a protest message on his iPhone at a small rally in support of Apple’s refusal to help the FBI access the cell phone of a gunman involved in the killings of 14 people in San Bernardino, in Santa Monica, California, United States, February 23, 2016.

The U.S. Justice Department on Monday resubmitted its case for Apple (AAPL.O) to unlock an encrypted iPhone belonging to a drug offender to a higher judge in the Eastern District of New York.

The move was in line with what the department said it would do after a magistrate judge previously sided with Apple, ruling that the Justice Department could not use a 1789 law known as the All Writs Act to compel the tech giant to unlock the phone.

The government is relying on the same law in its fight against Apple in a California court where a judge has ordered Apple to unlock the phone belonging to one of the San Bernardino shooters. Apple has filed a motion to dismiss the order, which it says would create a “back door” to phones that could be abused by criminals and governments.

In its filing on Monday, the Justice Department cited the California decision as evidence that the All Writs Act has been used to compel Apple to unlock the phones.

“Meanwhile, in the Central District Court of California on February 16, 2016, the government obtained an All Writs Act order requiring Apple to assist law enforcement in accessing the phone of one of the shooters involved in the mass murders in San Bernardino, California,” lawyers for the Justice Department said in the filing.

Apple Chief Executive Tim Cook has said he is willing to take the California case to the Supreme Court.

The phone in the New York case belonged Jun Feng, who has since pleaded guilty to participation in a methamphetamine distribution conspiracy. The Justice Department sought to unlock Feng’s phone to find other conspirators.

Unlike the phone used by Rizwan Farook in San Bernardino, Feng’s phone had an iOS 7 mobile operating system, which is not protected under the same encryption technology.

“Apple has extracted data from iPhones like this one pursuant to All Writs orders numerous times, including as a result of orders issued in the Eastern District of New York,” the Justice Department said in its Monday filing.

U.S. Magistrate Judge James Orenstein in Brooklyn ruled on Feb. 29 that he did not have the legal authority under the All Writs Act to order Apple to hand over the data from the phone.