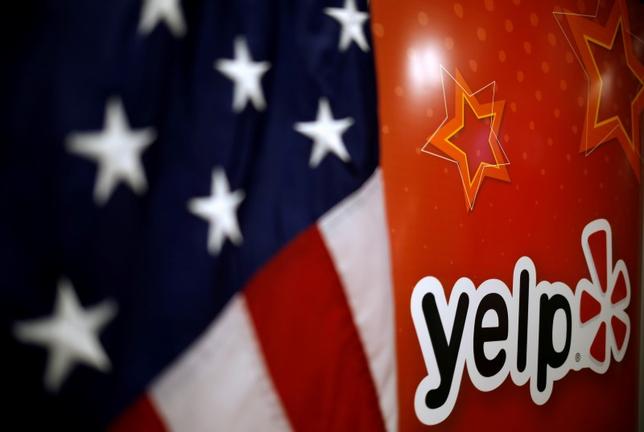 The Yelp Inc. logo is seen in their offices in Chicago, Illinois, March 5, 2015.

Consumer review website operator Yelp Inc reported an unexpected second-quarter profit and raised its full-year revenue forecast as investments in sales and marketing led to more businesses and consumers signing up for its services.

The company’s shares rose more than 8 percent in extended trading. They hit a 52-week high in regular trading on Tuesday.

Analysts were expecting a loss of 7 cents per share, according to Thomson Reuters I/B/E/S.

Yelp, whose website and app allow users to rate restaurants and a variety of other businesses, said net revenue rose 29.5 percent to $173.4 million.

Analysts were expecting revenue to increase to $169.8 million.

Yelp has been spending heavily to stay competitive in a market that includes everyone from heavyweights such as Alphabet Inc’s Google and Facebook Inc to smaller rivals such as GrubHub Inc and start-ups like TaskRabbit.

That helped Yelp’s local advertising accounts increase 32 percent to 128,000 in the quarter, roughly in line with analysts average estimate of 128,100, according to FactSet StreetAccount.

Yelp’s mobile app was accessed by 23 million unique devices on a monthly average basis, up 27 percent from a year earlier.

Yelp said it also partnered with and made a small investment in Nowait, a mobile platform that allows restaurants to manage their waiting lists.

(Reporting by Aishwarya Venugopal in Bengaluru; Editing by Savio D’Souza)