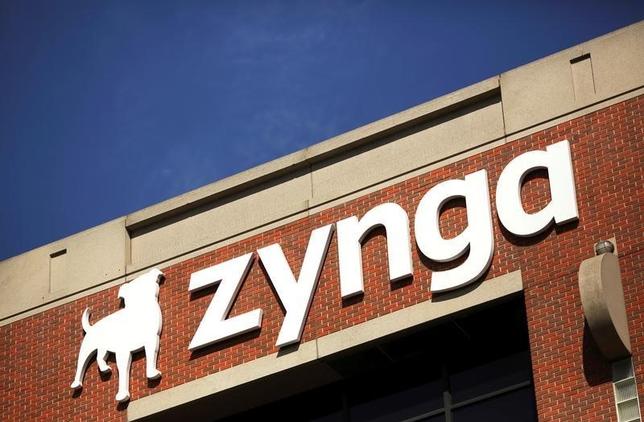 The Zynga logo is pictured at the company’s headquarters in San Francisco, California April 23, 2014.

“FarmVille” creator Zynga Inc (ZNGA.O) reported higher-than-expected bookings in the second quarter, driven by higher demand for its slot games and social games such as “Words with Friends” and “Zynga Poker”.

The company said bookings were $175 million in the three months ended June 30. Analysts on average had expected $171.3 million, according to research firm FactSet StreetAccount.

Bookings, an important metric indicating future revenue, include the sales of virtual goods such as currency and lives.

The company during the quarter launched games such as “Spin It Rich! Slots”, “Ice Age: Arctic Blast” and “Wizard of Oz: Magic Match”. The company’s long-delayed mobile racing game “CSR 2” launched at the end of second quarter.

“We still have got a lot a work to do. We are not declaring victory or getting too ahead of ourselves here,” Chief Executive Frank Gibeau told Reuters.

Gibeau – who replaced founder Mark Pincus – has a track record of managing EA’s mobile franchises such as “Plants vs. Zombies” and getting games shipped on time.

He said the launch of Pokemon GO had no positive or negative impact on the company, but added it has brought new people into mobile gaming.

Pokemon GO, which released in the United States on July 6, has become a global phenomenon, sending players into city streets, offices, parks and restaurants to search for colorful animated characters.

Gibeau said the company was also working on some projects in augmented reality, virtual reality and wearables.

Gibeau said most of the decline was driven by some of the legacy mobile games.

Revenue from advertising rose 21.6 percent, and accounted for 25.3 percent of total revenue.

The company forecast third-quarter bookings in the range of $180 million-$190 million, largely below the average analyst estimate of $188 million expected by FactSet StreetAccount.

Zynga is on track to launch 10 games this year, with the second half of the year featuring titles such as “FarmVille: Tropic Escape”, as well as another delayed action-strategy game, “Dawn of Titans”.

Separately, the company appointed Matt Bromberg as chief operating officer, with whom Gibeau has worked with in the past.