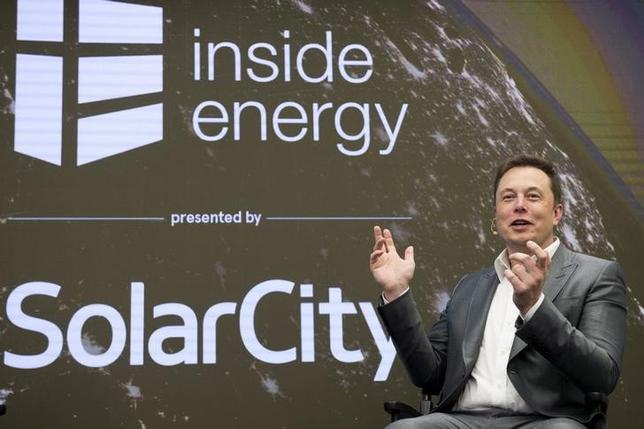 Tesla Motors Inc (TSLA.O) Chief Executive Elon Musk said Wednesday he will roll out a new master plan for the electric luxury car maker this evening, after hints he intends to make Tesla a renewable energy enterprise offering products and services beyond vehicles.

Musk told more than 4 million Twitter followers that a “post should go live on Tesla website” around 5:00 Pacific time. Earlier in the day, Musk had tweeted he was finishing work on a new plan for Tesla while listening to the soundtrack from the film version of the Great Gatsby.

Musk has said in tweets and public statements that an element of his strategy will involve linking Tesla’s electric vehicles to solar power products and services offered by SolarCity Corp(SCTY.O), a solar energy company he is chairman of.

On June 21, Musk proposed that Tesla buy SolarCity. He outlined a combined company that could provide consumers with the tools for a largely carbon-free lifestyle – electric cars recharged with electricity generated by SolarCity solar panel systems, or stored in the home using battery packs produced by Tesla’s battery Gigafactory under construction near Reno, Nev.

Musk owns 22 per cent of SolarCity’s shares, and has outlined plans to offer buyers of Tesla electric vehicles a solar power generation and battery storage system. Tesla on June 22 filed applications to use the Tesla name for solar energy systems and services, such as monitoring solar panels.

Tesla shares rose 1.4 per cent in trading Wednesday, ahead of Musk’s announcement. SolarCity shares were up 2.6 per cent.

Both Tesla and SolarCity are burning cash. Tesla in May sold about $1.7 billion in new shares, indicating much of that will be used to accelerate development of its new Model 3 car lineup and reach a production pace of 500,000 vehicles a year by 2018, two years ahead of an earlier plan.

On Monday, SolarCity said it raised $345 million to fund projects, and increased its debt facility by $110 million.

Tesla faces challenges on other fronts.

The National Highway Traffic Safety Administration is investigating the safety of the “Autopilot” system that allows Tesla vehicles to guide themselves on a highway with the driver’s hands off the wheel for extended periods.

The NHTSA probe followed a May 7 crash in which the driver of a Tesla Model S was killed when the car drove under a tractor trailer on a Florida highway.

Musk said in a tweet earlier this week that Tesla is working with Robert Bosch GmbH on improvements to the Autopilot system’s radar sensors.