SoftBank sees up to $2.4 billion profit on Alibaba share sale this business year 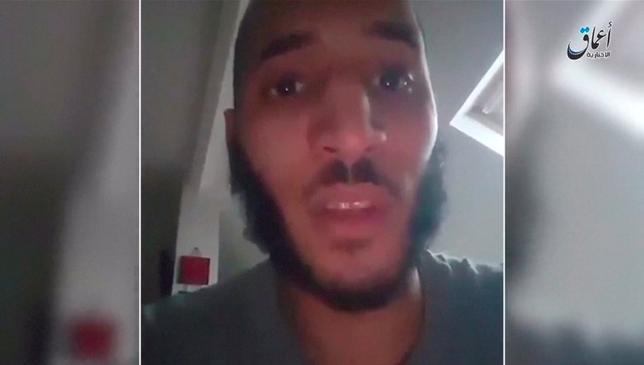 A frame grab from an online video posted by Larossi Abballa, the suspected attacker.

After Larossi Abballa killed a French police commander and the commander’s partner on Tuesday, he took to Facebook Live to encourage viewers in a 12-minute video to follow his example: Kill prison staff, police officials, journalists, lawmakers.

The incident underscores the immense challenges companies such as Facebook Inc (FB.O), Twitter Inc (TWTR.N) and Google’s YouTube (GOOGL.O) face as they push live video streaming to hundreds of millions of people.

Facebook in recent months has made its Live feature – which allows anyone to broadcast a video in real time – a central component of its strategy. Twitter, similarly, is focused on live content, and online video leader YouTube is also moving into live streaming.

All the companies have protocols in place to remove content that violates their terms of service, mainly by asking users to report offending material for review. But the companies generally promise a turnaround time of 24 hours on such reports, while live videos would have to be reviewed and removed in minutes to prevent wide dissemination.

“We do understand and recognize that there are unique challenges when it comes to content and safety for Live videos,” a Facebook spokeswoman said. “We’re deeply committed to improving the effectiveness of how we handle reports of live content that violates our Community Standards.”

Facebook is not the first company to grapple with abuse of live video. In April, an 18-year-old woman was charged after she livestreamed her friend’s rape on Twitter’s Periscope. In May, a young woman in France recorded herself on Periscope as she threw herself under a train.

Twitter did not respond to requests for comment. YouTube said it has teams around the world that review reported videos 24 hours a day, adding that it will terminate an account when it has reasonable belief that the person behind it is part of group that the U.S. government has identified as a “foreign terrorist organization.”

Facebook, which receives millions of reports a week of standards violations, said it reviews the vast majority within 24 hours. It said it is expanding a team dedicated to reviewing and staffing it 24 hours a day. Facebook can interrupt and remove broadcasts that violate policy.

The company said it is also testing the monitoring of broadcasts that go viral or are trending even before they are reported. That could give Facebook a way to stop offending broadcasts quickly, just as a television network might.

But as of yet there are no automated tools that can identify live videos that should be taken down, people familiar with the technology said.

Abballa, 25, told police negotiators he had answered an appeal by Islamic State chief Abu Bakr al-Baghdadi “to kill infidels at home with their families,” Paris prosecutor Francois Molins said at a news conference.

During the Facebook Live broadcast, Abballa spoke mostly in French and occasionally in Arabic. Although the video was quickly removed from Facebook, Islamic State shared an edited version through several of its channels.