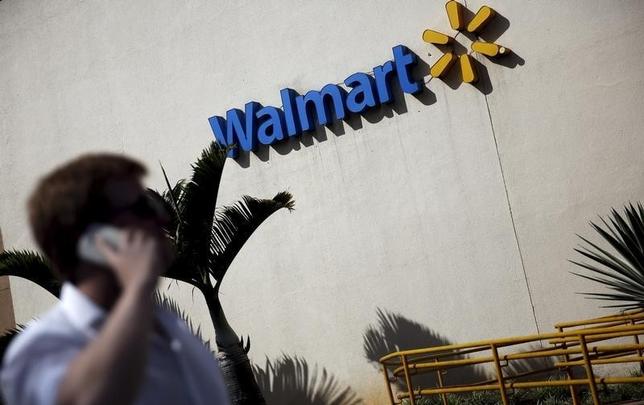 A man talks on his mobile phone in front of a Wal-Mart store in Sao Paulo, Brazil, February 16, 2016.

Wal-Mart Stores Inc executives touted the technology investments the world’s No. 1 retailer is making to boost online sales, during the annual shareholder meeting on Friday.

Chief Executive Officer Doug McMillon spoke about initiatives like online grocery pick up, the retailer’s two-day shipping program and its mobile wallet, Wal-Mart Pay. His comments capped off a week-long media event where the company displayed drones in warehouses and announced a partnership with Uber to deliver online groceries.

“We get to reimagine retail again, and that’s what we are going to do,” McMillon said. He also said changes to boost e-commerce sales will take some time to show results.

Wal-Mart onlines sales growth has sharply decelerated for five quarters even though its overall performance has been better than most competitors.

In the first quarter, online sales growth was 7 percent, down from 8 percent, 10 percent, 16 percent and 17 percent in the previous periods. In 2015, Wal-Mart’s online sales rose 12.3 percent to $13.7 billion, which was less than the jump of more than the 16 percent for market leader Amazon.com Inc, to $92.4 billion.

The meeting at the Bud Walton Arena in Fayetville, 30 miles from the company’s headquarters in Bentonville, was packed with 14,000 people, including workers from around the world and shareholders. Keeping with its practice of showcasing celebrities at the annual event, the meeting was hosted by talk show host James Cordon. Singers like Katy Perry, Andy Grammar and Nick Jonas also performed on stage.

The enthusiastic atmosphere momentarily turned somber after two shareholder proposals demanded higher wages, better treatment of employees and an independent chairman. The proposals did not get adequate votes.

Wal-Mart in February 2015 said it will lift its base pay to $10 an hour in 2016, a step it has implemented this year. Labor groups feel this is not enough.

The United Food and Commercial Workers Union published a full-page advertisement in a national newspaper on Friday asking shareholders to focus on struggling workers.

Labor groups have been demanding $15 an hour from retailers including Wal-Mart. The $15 minimum wage, also called “Fight for Fifteen” movement, has been a hot issue in cities across the country as well as in the U.S. presidential campaign, with Democratic candidate Bernie Sanders calling for a $15 “living wage.”