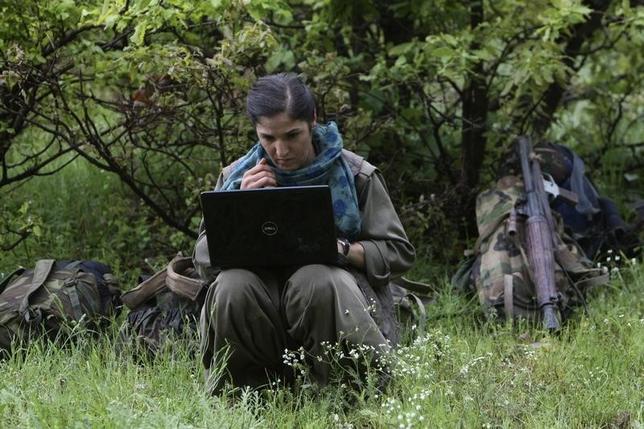 File photo of a member of Kurdistan Workers Party (PKK) works on her laptop in northern Iraq May 14, 2013.

Denied their own state in reality, Iraq’s Kurds have declared independence in cyberspace with a new domain name that has provoked the ire of a neighbor hostile to their aspirations.

The new top-level domain “.krd” gives Kurds a separate space in the virtual world at a time when they are gaining legitimacy on the ground through their alliance with the U.S.-led coalition against Islamic State.

Often described as the world’s largest ethnic group without their own state, the Kurds consider themselves victims of a pact that partitioned their homeland between Turkey, Iran, Syria and Iraq after World War One.

“Those who imprisoned us within these geographical boundaries do not have the same leverage in cyberspace. In the internet we choose our own borders,” said Hiwa Afandi, who got international recognition for the domain that opened this week for private companies, organizations and individuals to use.

“We would rather live in a country called Kurdistan, be it physical or in cyberspace,” said Afandi, head of the department of Information Technology in the Kurdish region of Iraq.

The Kurds were granted the “.krd” domain name in 2013 by the Internet Corporation for Assigned Names and Numbers (ICANN), a U.S.-based non-profit organization that manages internet addresses.

It is a “generic” name, not a two-letter “country code” name reserved for sovereign states. The region’s presidency and government already use it for their websites in Kurdish, Arabic and English at www.presidency.krd and www.gov.krd.

Baghdad, Tehran, Ankara and Damascus have historically sought to contain the ambitions of Kurds, banning education in their mother tongue and quelling uprisings, but they have been gaining international recognition.

A Kurdish leader in Iraq, where Kurds have achieved the highest degree of autonomy, is vowing to hold a non-binding referendum on independence this year as they battle Islamic State militants.

In neighboring Syria, Kurds have driven the insurgents back in the north of the country to create their own zone.

Afandi said he had expected Turkey, which is home to the largest number of Kurds and has a fraught relationship with them, to veto the application, but the only country to object so far was Iran.

In an official complaint to ICANN, Iran cited the risk of “serious political conflicts” and “concern … about the problems resulting from creation of the new gTLD (generic top-level domain) ‘.KRD’.”

“Some of the radical Kurdish communities … have recently started a movement pushing for the creation of a Kurdish nation state which is toward separation of Kurdish lands from Iran and Turkey,” it said. “The government of Islamic Republic of Iran is seriously concerned about these movements.”

Afandi said Iran had lodged the complaint too late to prevent the Kurds from obtaining a domain, joining other aspiring states such as Spain’s Catalonia, which had earlier obtained the “.cat” domain name from ICANN.

Catalonia guided Kurdistan through the application process, he said.

Even before the “.krd” domain was registered, few institutions in the Kurdish region used the Iraqi code “.iq”.

Although Kurds now have their own domain name, they still do not qualify for the two-letter country code reserved for members of the U.N. General Assembly. “Once Kurdistan becomes independent, we will work towards that,” Afandi said.