March 14, 2016
0
This post was originally published on this site

It’s remarkable how quickly a stolen purse or wallet can morph into full-blow identity theft, and possibly even result in the victim’s wrongful arrest. All of the above was visited recently on a fellow infosec professional whose admitted lapse in physical security lead to a mistaken early morning arrest in front of his kids. 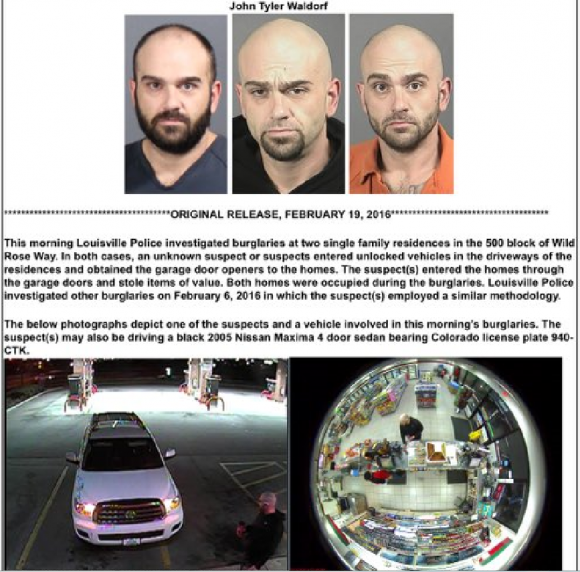 The guy police say stole Miller’s wallet and got him wrongfully arrested was himself apprehended earlier this month.

On the morning of Feb. 20, Lance Miller was arrested in front of his two children by local sheriffs in Golden, Colo. Miller, a managing partner at cybersecurity recruitment firm Curity, had discovered his wallet was missing three days prior to his arrest, reported it to the local police and canceled his credit cards. In the meantime someone had drained his checking account of approximately $5,000, and maxed out his credit cards for almost another $5,000.

“I was standing there in front of my kids saying, ‘You guys are crazy. Do I look like a burglar?’” Miller recalled. “The cop goes, ‘Well, I don’t know what a burglar looks like,’ and they put me in cuffs and in the car.”

Miller said it wasn’t until the 30-minute, handcuffed drive to police station that the local police and the local sheriff’s office began comparing notes, discovering in the process that they’d grabbed the wrong guy and removing the cuffs. Miller soon learned the thief who’d stolen his wallet had impersonated him during multiple traffic stops. A car the impostor was driving also was spotted speeding away from the scene of a burglary, but Miller said the police in that case didn’t give chase in that case because it wasn’t a violent crime.

Miller’s arrest came less than 24 hours after the local Arvada Police Department called to alert him that someone had tried to use his credit card at a nearby bank. Not long after that, a fuel station owner called the cops after getting suspicious about a customer and writing down his license plates.

“When we got to the [police] station, the police chief met me in the parking lot and apologized, then brought me 3 cups of coffee,” Miller said.

According to Miller, the police eventually arrested the guy suspected of stealing his wallet and other crimes that were previously pinned on Miller. The authorities now believe the man responsible is one John Tyler Waldorf, a 37-year-old suspect who had at least 16 warrants for his arrest pending in surrounding counties in connection with burglary and other alleged offenses.

Miller said investigators told him that Waldorf was suspected of associating with a white supremacist crime ring involved in identity theft, drug dealing and serial burglary.

“When these guys are not in prison, they’re expected to earn for the gang,” Miller said. “And apparently one of the best earning methods for these guys is ID theft.”

Louisville, Colo. police issued a bulletin explaining that Waldorf and his associates were known to have entered unlocked vehicles in the driveways of local residences and grabbed the garage door openers to the homes. “The suspect(s) entered the homes through the garage doors and stole items of value,” the police explained. “Both homes were occupied during the burglaries.”

Miller allows that the thieves in his case didn’t need to open the garage or enter his home: He’d absent-mindedly left his wallet in the car overnight while the vehicle was parked in the open garage. He now vows to tighten up his personal security habits.

“We live in a pretty nice area, and I got lulled into the idea that the garage was safe,” he said. “But in the end, it’s all on me. I’m an infosec guy, and if I can’t practice better operational security like that at my house, I should get the hell out of this industry.”

If your wallet or purse is lost or stolen, it’s a good idea to do most – if not all — of these things:

-File a police report as soon as possible to establish a record of the loss. If possible, get a physical copy of the police report at some point. You may be able to file a report and obtain a copy of it online, or you may have to go down to the local police station and pay a small administrative fee to get a copy. Either way, this report can be very useful in getting you a freeze on your credit file or an extended fraud alert at no cost if you decide to do that down the road.

-Contact your bank and report any checks or credit/debit cards lost or stolen. Most banks issue credit and debit cards with “zero liability” provisions, meaning you’re not on the hook for fraudulent charges or withdrawals — provided you report them promptly. The Truth In Lending Act limits consumer liability to $50.00 once a credit card is reported lost or stolen, although many card issuers will waive that amount as well. Fraudulent debit card charges are a different story: The Electronic Fund Transfer Act limits liability for unauthorized charges to $50.00, if you notify your financial institution within two business days of discovering that your debit card was “lost or stolen.” If you wait longer, but notify your bank within 60 days of the date your statement is mailed, you may be responsible for up to $500.00. Wait longer than that and you could lose all the money stolen from your account.

-Contact one of the major credit reporting bureaus (Equifax, Experian, Innovis and Trans Union) and at the very least ask to put a fraud alert on your file, to prevent identity theft in the future. By law, the one you alert has to share the alert with the other three. The initial fraud alert stays on for 90 days. If you have that police report handy, you can instead request an extended fraud alert, which stays in effect for seven years.

-Fraud alerts are okay, but consider placing a security freeze on your credit file with the major bureaus. For more on the importance of a security freeze, check out How I Learned to Stop Worrying and Embrace the Security Freeze.

-Order a free copy of your credit report from one of the major bureaus. By law, you are entitled to a free report from each of the bureaus once a year. The only real free place to get your report is via the site mandated by the federal government: annualcreditreport.com.

This entry was posted on Monday, March 14th, 2016 at 9:14 am and is filed under A Little Sunshine, Latest Warnings. You can follow any comments to this entry through the RSS 2.0 feed. You can skip to the end and leave a comment. Pinging is currently not allowed.