Amazon to restore encryption to Fire tablets after complaints 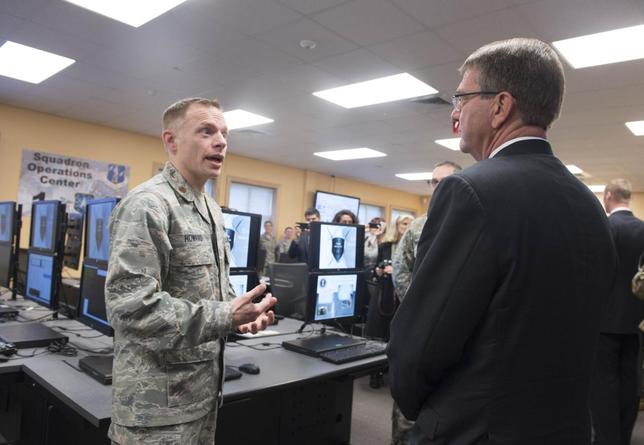 U.S. Defense Secretary Ash Carter (R) is briefed on the capabilities of the National Guard Cyber Unit at Joint base Lewis-McChord, Washington, March 4, 2016.

U.S. Defense Secretary Ash Carter said the National Guard’s cyber squadrons will play an increasingly important role in assessing the vulnerabilities of U.S. industrial infrastructure and could be asked to join the fight against Islamic State.

The National Guard – a reserve military force that resides in the states but can be mobilized for national needs – is a key part of the military’s larger effort to set up over 120 cyber squadrons to respond to cyber attacks and prevent them.

One such unit, the 262nd squadron, is a 101-person team that includes employees of Microsoft Corp and Alphabet Inc’s Google. The unit is “famous throughout the country” for several high profile vulnerability assessments, Carter said at the Joint Base Lewis-McChord in Tacoma, Washington late on Friday.

He told reporters the squadron was not currently engaging in offensive cyber missions but could be in the future.

“Units like this can also participate in offensive cyber operations of the kind that I have stressed we are conducting, and actually accelerating, in Iraq and Syria, to secure the prompt defeat of ISIL, which we need to do and will do,” Carter said. “We’re looking for ways to accelerate that, and cyber’s one of them.”

The 262nd squadron’s work includes a study last year on the control system used by Snohomish County Public Utility District in Washington state, which helped the utility strengthen its security, and a 2010 case in which the U.S. Air Force briefly lost contact with 50 Minuteman III intercontinental ballistic missiles.

The 2010 assessment cost about $20,000, much less than the $150,000 that a private sector company would likely charge, said Lieutenant Colonel Kenneth Borchers, deputy commander of the 252nd Cyber Operations Group, which oversees the 262nd squadron.

Borchers said the squadron is the only National Guard group that currently assesses industrial control systems, but it is now looking to train others. It is also studying the security of big weapons programs, such as the B-52 bomber.

Using National Guard units for such work made sense because it allowed the military to benefit from private sector cyber experts, Carter said.

“It brings in the high-tech sector in a very direct way to the mission of protecting the country,” he told reporters. “And we’re absolutely going to do more of it.”